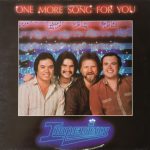 One More Song For You is the 26th studio album by the Christian music group The Imperials, released in late 1979 on DaySpring Records. It was the first of two albums that the group collaborated with well-known musician/producer Michael Omartian, moving them to a more contemporary pop sound, with the second being their next album Priority (1980). “I’m Forgiven” went to number one on the Christian radio charts and stayed there for 13 weeks. The Imperials were winners at the 12th GMA Dove Awards winning three for Group of the Year, Artist of the Year and Pop/Contemporary Album of the Year with lead singer Russ Taff winning Male Vocalist of the Year. One More Song for You was nominated for a Grammy Award for Best Gospel Performance, Contemporary or Inspirational at the 23rd Grammy Awards. The album reached number one on the Billboard Inspirational Albums chart. CCM Magazine has ranked One More Song for You at number 75 on their 2001 book The 100 Greatest Albums in Christian Music.