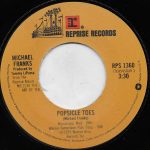 “Popsicle Toes” is a a single by Michael Franks from his album The Art Of Tea. It was released in 1976 and peaked at #43 in the US Billboard Charts.

The Art of Tea is a jazz vocal album by Michael Franks, released in February 1976. After his eponymous album with Brut in 1973, The Art of Tea was Franks’ breakout album on a major record label, and his first release with Frank Sinatra’s Reprise. It was Franks’ second studio album, prior to Sleeping Gypsy. […]