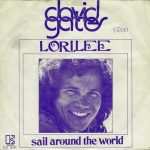 “Sail Around The World” is the second single by David Gates taken from his album First (1973). It peaked at #50 in the US Billboard Charts.