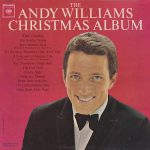 The Andy Williams Christmas Album is the first Christmas holiday album released by singer Andy Williams and his twelfth studio album overall. It was issued by Columbia Records in 1963, and it would prove to be the first of eight Christmas albums released by Williams. Though it was also the album that introduced Williams’ perennial holiday classic “It’s the Most Wonderful Time of the Year”, Columbia instead opted to release Williams’ cover of “White Christmas” as the album’s promotional single at the time.

A front-page story in Billboard magazine on Nov. 23, 1963, made clear the album was already destined to be a big hit, reporting: “Though the majority of retailers around the country that were contacted reported that Christmas product sales were just starting, they have already singled out the new ‘Andy Williams Christmas Album’ as the probably No. 1 LP for the next two months; at least of those albums thus far on the market. It is already registering heavy sales, as is his single ‘White Christmas.’