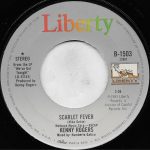 “Scarlet Fever” is a song written by Mike Dekle, and recorded by American country music artist Kenny Rogers. It was released in June 1983 as the third single from the album We’ve Got Tonight. The song reached number 94 on the Billboard Hot 100 chart in mid-1983. The song peaked at number 5 on the country chart

We’ve Got Tonight is the tenth solo studio album by Kenny Rogers, released in 1983. It is also his last with Liberty Records before moving to RCA Nashville. The title cut, a duet with Sheena Easton, was the debut single and became one of Rogers’ signature hits, soaring to #1 on the country charts and […]