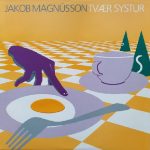 Jakob Frímann Magnússon is a composer, keyboard player, film director and producer. In Iceland he is best known as the keyboardist and one of the founders of the multiartistic band Stuðmenn, with which he has so far produced 16 albums as of 2017. He has also directed, produced and starred in several films, and released several solo albums with a number of famous jazz musicians from the United States. For a period of the 1990s he was the cultural attaché of the Icelandic embassy in London. Since 2002, aside from playing in Stuðmenn and recording new albums, Jakob Frímann is the co-owner and manager of the advertisement agency Bankastræti in Reykja