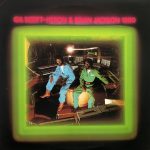 1980 is a studio album by American vocalist Gil Scott-Heron and keyboardist Brian Jackson. It was recorded from August to October 1979 and released in February 1980 by Arista Records.

Scott-Heron and Jackson produced 1980 with Malcolm Cecil and performed with a host of studio musicians, including drummer Harvey Mason Sr, guitarist Marlo Henderson, and trombonist Bill Watrous. They incorporated sounds from contemporary pop music, such as disco, dance, and new wave, into their established jazz-funk style. Jackson played a number of instruments, including the T.O.N.T.O. synthesizer, which was featured in the album’s cover photo. Scott-Heron wrote the lyrics to all the songs, which explored societal themes, pressures in life, and fear of the future.

The album charted at number 82 on the Billboard 200 while also impacting the R&B and jazz charts. A critical success, it received praise for its musical qualities and Scott-Heron’s subject matter. 1980 was Scott-Heron and Jackson’s last album together.

2 Alien (Hold On To Your Dreams)