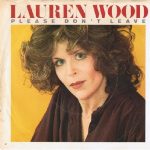 “Please Don’t LeaveMe” is a a single by Lauren Wood from her self titled album. It was released in 1979 and reached #20 in the US Billboard Charts.

Lauren Wood’s career began in the mid ’70s when she formed a band called Rebecca and the Sunnybrook Farmers. In 1972, she provided back-up vocals on Frank Zappa’s album The Grand Wazoo. In 1973, Lauren Wood formed the band Chunky, Novi and Ernie with her cousin Novi Novog and bassist Ernie Emerita They released two […]