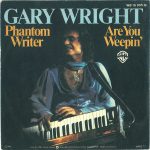 Phantom Writer is a single by Gary Wright from his album Light Of Smiles. It was released in 1977 and peaked at #43 in the US Billboard Charts.

Warner Bros. issued The Light of Smiles in January 1977, with “Phantom Writer” as the album’s lead single. Wright toured extensively to promote the release. In his 2014 autobiography, he regrets choosing “Phantom Writer” for the single, and cites this decision as an example of his “smug” belief that, after his hit singles “Dream Weaver” and “Love Is Alive” in 1976, “anything I released would be hugely successful”. Wright says he should have edited down “Water Sign” instead for release as the lead single.

The Light Of Smiles is Gary Wright‘s  fourth studio album as a solo artist, it appeared in 1977. Gary Wright continued the music of his previous album The dream weaver, but exposes more the meetings with the Indian culture. Titles like The light of smiles, Who am I ?, Empty inside and Child of light are […]