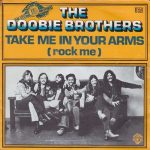 “Take Me In Your Arms (Rock Me A Little While)” is a song written by the premier Motown songwriting/production team of the 1960s Holland–Dozier–Holland. It was most popular in 1975 when it was recorded by the Doobie Brothers.

The Doobie Brothers remade “Take Me in Your Arms” for their 1975 Stampede album. Tom Johnston, who was then the Doobies’ frontman, later recalled, “I had been a fan of that song since it came out somewhere in the ’60s. I just loved that song. So somewhere around ’72 I started lobbying to get the band to do a cover of that. And I didn’t get anywhere until ’75. Then finally in 1975 we actually did it.”

Stampede is the fifth studio album by American rock band The Doobie Brothers. The album was released on April 25, 1975, by Warner Bros. Records. It was the final album by the band before Michael McDonald replaced Tom Johnston as lead vocalist and primary songwriter. The album has been certified gold by the RIAA. Tracks […]