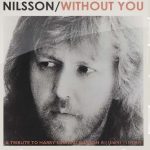 “Without You” is a song written by Pete Ham and Tom Evans of British rock group Badfinger, and first released on their 1970 album No Dice. The power ballad has been recorded by over 180 artists, and versions released as singles by Harry Nilsson (1971) and Mariah Carey (1994) became international best-sellers. Paul McCartney once described the ballad as “the killer song of all time”

Harry Nilsson, at the time best known for his hit “Everybody’s Talkin'” and for composing “One”, recorded by Three Dog Night, heard Badfinger’s recording of “Without You” at a party,  and mistook it for a Beatles song. After realising it was not, he decided to cover the song for his 1971 album Nilsson Schmilsson. The single was released by RCA in the autumn of 1971, and first charted on radio stations across the US in early December. “Without You” debuted (at 99) on Billboard’s Hot 100 in the chart dated December 18, 1971, and on its tenth week, in the chart dated February 19, 1972, started its four-week run at number one. Billboard ranked it as the number four single of 1972. The record topped Billboard’s Easy Listening chart for five weeks.

The record spent five weeks at number one on the UK Singles Chart, beginning on 11 March, eventually selling almost 800,000 copies. It went to number one in several other countries, including Australia (for five weeks), Ireland (two weeks) and New Zealand (two weeks).

The single, Grammy-nominated for Record of the Year, was produced by Richard Perry, who later explained, “It was a different record for its time. It was a big ballad with a heavy backbeat, and although many artists have cut songs like it since, no one was doing it then.”[14] Gary Wright, who worked with Badfinger on George Harrison’s projects, played the piano. Also featured are Klaus Voormann (bass), Jim Keltner (drums) and John Uribe (acoustic guitar). The string and horn arrangements are by Paul Buckmaster. In 1973 the single won Nilsson the Grammy award for Best Pop Vocal Performance, Male. While Nilsson rarely gave live concerts, he did perform the song with Ringo Starr and his All-Starr Band at Caesar’s Palace in Las Vegas in September 1992

Nilsson Schmilsson is the seventh album by American singer Harry Nilsson, released by RCA Records in November 1971. It was Nilsson’s most commercially successful work, producing three of his best-known songs. Among these was the number 1 hit “Without You”, written by Pete Ham and Tom Evans of the group Badfinger. The album was the […]