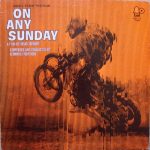 On Any Sunday is a 1971 American documentary film about motorcycle sport, directed by Bruce Brown. It was nominated for a 1972 Academy Award for Best Documentary Feature. Brown tried to show the unique talents needed for the different forms of racing. For instance, the motocross riders were typically free-spirited types, while desert racers were often loners. In Grand National racing, Brown showed widely differing personalities, such as the business-like approach to racing displayed by Mert Lawwill versus the carefree approach that David Aldana became known for.

The soundtrack was composed by Dominic Frontiere.