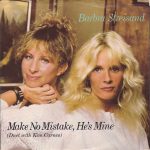 The song was recorded by Streisand and Carnes, co-produced (with Bill Cuomo) by Carnes, It was released on Streisand’s 1984 album Emotion and as a single in December 1984, it hit #8 on the Adult Contemporary chart and #51 on the Billboard Hot 100 in early 1985.

In 1985 Carnes become the first artist to appear on the Billboard charts as part of a solo (“Invitation To Dance”), duet (“Make No Mistake, He’s Mine”), and trio (“What About Me?”) at the same time.

Emotion is the twenty-third studio album released by Barbra Streisand. It was released on October 9, 1984 and went platinum in the United States on December 18 the same year. This album was recorded in eleven L.A. and two N.Y. studios with a multitude of producers and writers. The title track, the third single released […]