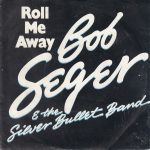 “Roll Me Away” is a song written by American rock artist Bob Seger on the album The Distance by Bob Seger and the Silver Bullet Band. The song peaked at number 27 on the Billboard Hot 100 chart.

According to Seger the song was inspired by a motorcycle trip he took to Jackson Hole, Wyoming. He stated:

I wanted to do that for a long time. It was fascinating being out. The first night it was 42 degrees in northern Minnesota; the second it was 106 in South Dakota and all I had on was my shorts, and my feet were up on the handlebars to keep them from boiling on the engine. It was just silence and feeling nature.