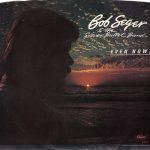 “Even Now” is a song written by Bob Seger that was first released on his 1982 album The Distance. It was also released as a single, backed with “Little Victories,” and reached #12 on the Billboard Hot 100 and #2 on the Mainstream Rock chart.

“Even Now” reflected Seger’s original concept for The Distance of writing an album about relationships, even though he did not ultimately stick to that concept. Seger has stated that the line “Out in the distance, always within reach/There’s a crossroad where all the victims meet” was intended to set up the entire album. “Even Now” is a love song that Rolling Stone Magazine critic Dave Marsh describes it as an “[anthem] of perseverance” in that it uses “personal relationships as metaphors for a vision of the world and the way that it works and what it takes (and costs) to cope with such a place and time.” It was dedicated to Seger’s long-time companion at the time, Jan Dinsdale. Seger has stated “The idea is that there’s always a way you can screw up when you’re in a relationship. There’s always that little thing in the back of your mind saying, ‘I’m gonna screw up. I’m gonna go out with somebody else and lie, or whatever.’ Whatever it takes to mess up a relationship.”

Music journalist Gary Graff described it as song where Seger exults “in triumphing over adversity.” Los Angeles Times critic Richard Cromelin describes it as a song about the “lasting values” in “long-held love that becomes more precious in its rebirth.”