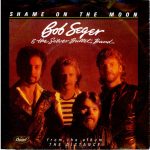 “Shame On The Moon” is a song written by Rodney Crowell and first recorded for his eponymous 1981 album. It was subsequently covered by Bob Seger & The Silver Bullet Band, as the lead single from their 1982 album The Distance.

Glenn Frey joins Seger on background harmony vocals on the song. The song spent four weeks at number two on the Billboard Hot 100 pop singles chart (blocked from the top spot by Patti Austin and James Ingram’s “Baby, Come to Me” and by Michael Jackson’s smash hit “Billie Jean”) and topped the adult contemporary chart. The song also went to number 15 on the country chart in early 1983, marking Seger’s only Top 40 entry on that chart. Tanya Tucker also covered the song, for her 1983 album Changes.