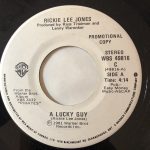 “A Lucky Guy” is the third single by Rickie Lee Jones from her album Pirates. It was released in 1981 and was the only single from that album that hit the US Billboard Charts, it peaked at #64.

Pirates is the second album by Chicago-born singer, songwriter, and musician Rickie Lee Jones, released in July 1981, two years after her eponymous debut Rickie Lee Jones. The album is partially an account of her break-up with fellow musician Tom Waits after the success of her debut album. Initial recording for Pirates began in January […]