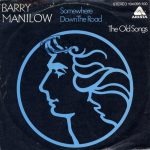 “Somewhere Down the Road” is a popular song written by Cynthia Weil and Tom Snow and most famously recorded in 1981 by Barry Manilow. Weil wrote the song’s lyrics and Snow wrote the melody.

The song was chosen for Barry Manilow by Arista Records’ then-president, Clive Davis, and recorded by Manilow on his album If I Should Love Again. Released as the follow-up to the top 20 hit “The Old Songs”, “Somewhere Down the Road” did moderately well as a single in early 1982, reaching #21 on the Billboard Hot 100. On February 20, 1982, the record reached #1 on Billboard’s Adult Contemporary chart and stayed there for two weeks. In Canada, the song reached number seven on the Adult Contemporary chart.

If I Should Love Again is the eighth studio album released by singer and songwriter Barry Manilow. The album was recorded at United Western Recording Studios in Los Angeles, California. Barry refers to it as “The most romantic album that I ever made”, and remarks “I was so caught up in romance that I actually […]