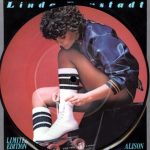 “Alison” is a song written by and first recorded by Elvis Costello in 1977 for his debut album on Stiff Records. Costello claimed the song was written as an ode to a woman he saw working at a supermarket, though he has remained vague on the meaning. Though Costello’s single never charted, it has become one of his most famous tracks.

Linda Ronstadt, who covered the song and released her version in 1979, had a moderate hit with it. There have also been several other cover versions of this song.