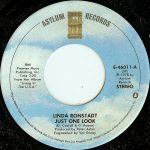 “Ooo Baby Baby” is a song written by Smokey Robinson and Pete Moore. It is a classic 1965 hit single by The Miracles for the Tamla (Motown) label. The song has inspired numerous other cover versions by other artists over the years, including covers by Ella Fitzgerald, Todd Rundgren, The Escorts, The Five Stairsteps, Linda Ronstadt , and many others. The Miracles’ original version of “Ooo Baby Baby”, is listed as number 266 on Rolling Stone Magazine’s list of “The 500 Greatest Songs of All Time”.

In 1978, Linda Ronstadt recorded a cover version of “Ooh Baby Baby” and included it on her double-platinum album Living in the USA. Her version of the single reached number 2 on the Contemporary chart and peaked at number 7 on the Billboard Hot 100 in 1979 (it also hit the R&B and Country singles charts). Her single was produced by Peter Asher and issued on Asylum Records. Ronstadt performed with Smokey Robinson both “The Tracks of My Tears” and “Ooh Baby Baby” on the Motown 25: Yesterday, Today, Forever special broadcast on May 16, 1983.