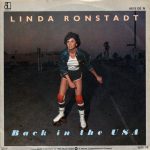 Ronstadt had heard the Berry original while being driven around Los Angeles by Eagles member Glenn Frey who had once been in her band, the track being on a home-made cassette Frey had playing in his tape deck. Ronstadt recalls that she’d been reminding Frey “how we used to sit around the Troubadour bar and go: ‘Oh it’s so horrible and I can’t get a record deal.’ We were so broke and so miserable and we’d feel so sorry for ourselves and we were so precious about it. Then all of a sudden I looked at him and I went: ‘Boy, life’s really tough. We’re going off to ski [at Aspen] with all this money in our pockets, we’re going to have a good time, and we’ve got great music on the tape player.’ Just then “Back in the U.S.A.” came on and I went: ‘Boy that would be a great song to sing. I think I’ll do that one.’