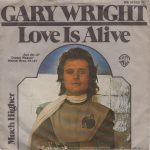 “Love Is Alive” is a 1976 song by Gary Wright taken from the album The Dream Weaver, released the previous year, it features Wright on vocals and keyboards with Andy Newmark on drums. The album’s title cut and “Love is Alive” both peaked at No. 2 on the Billboard Hot 100 singles chart. “Love is Alive” spent 27 weeks on the chart, seven weeks longer than “Dream Weaver”. Billboard ranked “Love is Alive” as the No. 9 song of 1976.

In the US, “Love Is Alive” peaked at #2 on the Hot 100. “Kiss and Say Goodbye” by The Manhattans and “Don’t Go Breaking My Heart” by Elton John and Kiki Dee kept it from the #1 spot. In Canada, the song reached No. 6.

The Dream Weaver is a solo album by Gary Wright released in July 1975. The album was said by Wright to be the first-ever all-keyboard album (though there were many all-synthesizer LPs before this, including Switched-On Bach by Wendy Carlos, in 1968), but in fact it also features drums, vocals, and guitar, among other instruments. […]