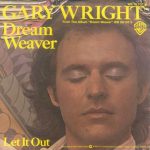 “Dream Weaver” is a song by the American singer Gary Wright, released as the first single from his third studio album The Dream Weaver in December 1975.

The track features Wright on vocals and keyboards and Jim Keltner on drums. According to Gary Wright, the song was inspired by Autobiography of a Yogi, which was given to him by George Harrison. Paramhansa Yogananda’s poem “God! God! God!” made reference to “the idea of the mind weaving dreams”. The expression “Dream Weaver” was popularized by John Lennon in 1970 in his song “God”, taken from his solo album John Lennon/Plastic Ono Band. This song depicts Lennon’s declaration that he was the dream weaver of the 1960s, breaking away from the influences and dogmas that influenced his life.

The Dream Weaver is a solo album by Gary Wright released in July 1975. The album was said by Wright to be the first-ever all-keyboard album (though there were many all-synthesizer LPs before this, including Switched-On Bach by Wendy Carlos, in 1968), but in fact it also features drums, vocals, and guitar, among other instruments. […]