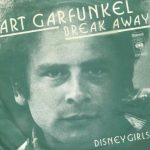 “Break Away” (also known as “Breakaway”) is a song written by Benny Gallagher and Graham Lyle and first recorded by Art Garfunkel for his 1975 album Breakaway. Gallagher and Lyle released their own version on their 1976 album, also titled Breakaway.

“Break Away”, with backing vocals by David Crosby and Graham Nash, was the second single release from Garfunkel’s album. The song peaked at number thirty-nine on the Billboard Hot 100 and, in February 1976, went to number one on the Easy Listening chart for one week.[1]

On the Canadian Adult Contemporary chart, “Break Away” reached number two.[2] It was blocked from reaching the number-one position by Paul Simon’s song, “50 Ways to Leave Your Lover”.

Gallagher and Lyle, the writers of the song, released their version of “Break Away” in late 1976, the title track of their Breakaway LP. It charted in the British Isles, reaching number 35 in the UK and number seven in Ireland.

Breakaway is the second solo studio album by Art Garfunkel. It was released in 1975 on Columbia Records. It was produced by Richard Perry who has produced albums for other artists such as Carly Simon. It includes three Top 40 singles: “I Only Have Eyes for You” (US #18, UK #1), “Break Away” (US #39) […]