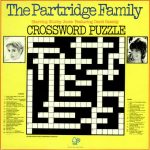 Crossword Puzzle is the seventh album by The Partridge Family released in June 1973. It was the group’s second-to-last album and the final Partridge Family record to make the album charts, peaking at #167 on Billboard 200 and spending just 5 weeks on the charts. Bell Records, losing faith in the group after oversaturating the market with product, chose not to release a US single from the album, though “Sunshine” was released as a single in Japan. This album was released on CD in 2003 on Arista’s BMG Heritage label. The album cover features an actual crossword puzzle on the front with the answers included inside on the dust sleeve. Once again after Notebook, there was no group photo on the album cover, only a small black-and-white picture of Shirley Jones to the left and one of David Cassidy to the right.