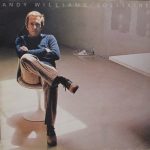 Solitaire is the thirty-first studio album by American pop singer Andy Williams, released in the fall of 1973 by Columbia Records and was an attempt to move away from his formulaic series of recent releases that relied heavily on songs that other artists had made popular.

The album made its first appearance on Billboard magazine’s Top LP’s & Tapes chart in the issue dated November 17, 1973, and remained there for six weeks, peaking at number 185. It entered the UK album chart the following month, on December 22, and stayed there for 26 weeks, during which time it made it all the way to number three. On January 1, 1974, the newly formed British Phonographic Industry awarded the album with Silver certification for sales of 60,000 units in the UK, and Gold certification from the BPI, for sales of 100,000 units, followed on January 1, 1975

2 Make It Easy On Yourself

3 You Are The Sunshine Of My Lif