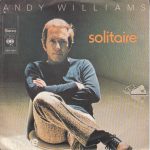 “Solitaire” is a ballad written by Neil Sedaka and Phil Cody. Cody employs playing the card game of solitaire as a metaphor for a man “who lost his love through his indifference”—”while life goes on around him everywhere he’s playing solitaire”. The song is best known via its rendition by the Carpenters.

In autumn 1973 single was released by Andy Williams which would reach number 4 in the UK Singles Chart and afford Williams a number 1 hit in South Africa. The title cut from an album produced by Richard Perry, Williams’ “Solitaire” also became a US Easy Listening hit at number 23.

Solitaire is the thirty-first studio album by American pop singer Andy Williams, released in the fall of 1973 by Columbia Records and was an attempt to move away from his formulaic series of recent releases that relied heavily on songs that other artists had made popular. The album made its first appearance on Billboard magazine’s […]