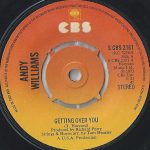 “Getting Over You” is a song written by Tony Hazzard in 1973, recorded by various artists, including the writer. Hazzard’s original is from his LP ‘Was That Alright Then?’ and was included on his double album ‘Go North – The Bronze Anthology’.

Andy Williams recorded the most successful version of the song, entitled simply as “Getting Over You”. It is a track from his Solitaire album.

Solitaire is the thirty-first studio album by American pop singer Andy Williams, released in the fall of 1973 by Columbia Records and was an attempt to move away from his formulaic series of recent releases that relied heavily on songs that other artists had made popular. The album made its first appearance on Billboard magazine’s […]