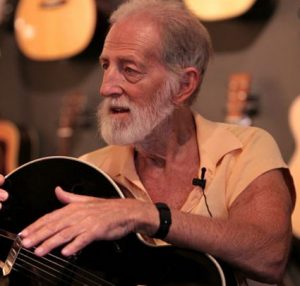 Dennis Matthew Budimir (born June 20, 1938) is an American jazz and rock guitarist. Budimir learned to play piano and guitar in his youth and first played professionally when he was fourteen years old. He worked in the late 1950s in the bands of Ken Hanna, Keith Williams, Harry James, and Chico Hamilton.

In 1960-1961 he worked with Bud Shank and accompanied Peggy Lee, then entered into military service in 1961. After his discharge in 1963 he toured Japan with Bobby Troup and returned to the Los Angeles area, where he played as a studio musician for the next several decades.

He recorded in this capacity with Julie London, Dave Grusin, Quincy Jones, Lalo Schifrin, Marty Paich, Don Ellis, Gil Melle, George Harrison, Ringo Starr, Johnny Mathis, and Doris Day. In jazz idioms he worked with Milt Jackson in the 1970s and with Ray Brown and Johnny Mandel. He recorded with the Capp-Pierce Juggernaut in the 1990s.