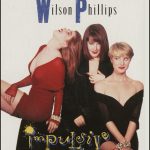 “Impulsive” is a song recorded by Wilson Phillips, released as the third single from their debut album Wilson Phillips. Written by Clif Magness and Steve Kipner, it was released in 1990 on SBK Records. The song reached number four on the US Billboard Hot 100 and number one on the Canadian RPM Top Singles chart. It was the first single to feature Wendy Wilson as the lead vocalist and includes a slide guitar solo from Joe Walsh. Billboard ranked the song number 99 on their list of 100 Greatest Girl Group Songs of All Time.

Wilson Phillips is the 1990 debut album by Wilson Phillips. The singles, “Hold On”, “Release Me” and “You’re in Love”, all hit number one on the U.S. Billboard Hot 100 singles chart. “Impulsive” also hit number four, and the fifth single “The Dream Is Still Alive” reached the top 20. The album sold 5 million […]