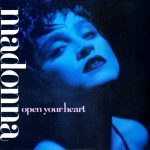 “Open Your Heart” is a song by American singer Madonna from her third studio album True Blue (1986). It was released as the album’s fourth single on November 19, 1986 by Sire Records. It has since appeared remixed on the compilation albums The Immaculate Collection (1990) and Celebration (2009). Originally a rock and roll song titled “Follow Your Heart”, it was written for singer Cyndi Lauper by songwriters Gardner Cole and Peter Rafelson. Looking for new songs for True Blue, Madonna accepted it. She and Patrick Leonard transformed it into a dance-pop song. “Open Your Heart” is an innuendo-laden love song where Madonna expresses her sexual desire.

The song was well received by critics, who commended its simplicity. It was also successful commercially, reaching the top-ten of the charts in Belgium, Canada, Ireland, Netherlands, and the United Kingdom, and the top of the Billboard Hot 100 in the United States, thus making it Madonna’s fifth number-one single in the US. The music video for “Open Your Heart” features a story line completely different from that of the song. In it, Madonna plays an exotic dancer in a peep-show club who befriends a little boy and subsequently escapes. It was critically acclaimed for subverting the male gaze, but the plot point of a child entering a strip club was criticized. The video is an homage to actresses Liza Minnelli and Marlene Dietrich.

True Blue is the third studio album by American singer-songwriter Madonna, released on June 30, 1986, by Sire Records. She co-wrote and produced the entire album with Stephen Bray and Patrick Leonard. True Blue deals with her visions of love, work, dreams as well as disappointments, and was inspired by her then husband Sean Penn, […]