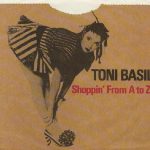 “Shoppin’ from A to Z” is a song by US singer-songwriter Toni Basil, released in 1983 as the fourth and final single from her debut album Word of Mouth. It was released in the US only. After the poor performance of “Nobody” in the UK, there was a lot of depending on the popularity of “Shoppin’ from A to Z” in the US, but the song failed to match the success of chart topper “Mickey”, peaking at No. 77. A music video was made for the song. The song was covered in a 1985 episode of Fame called “Wishes. It was also covered (in Japanese) by Tomoe Shinohara. The song features a shopping list consisting of various grocery items, each beginning with a different letter of the alphabet. On the album version, it is shouted out by a chorus. However, in the single version this is replaced by comical voices saying the name of each item.