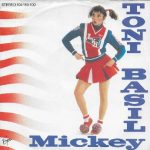 “Mickey” is a 1981 song recorded by American singer and choreographer Toni Basil on her debut album Word of Mouth. Written by Mike Chapman and Nicky Chinn as “Kitty”, it was first recorded by UK music group Racey during 1979, appearing on their debut album Smash and Grab. Toni Basil changed the name from Kitty to Mickey to make the song about a man.