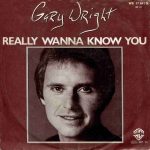 “Really Wanna Know You” is a 1981 song by Gary Wright that was a hit single in the U.S., reaching No. 16 on the Billboard Hot 100. It was taken from the album The Right Place. The song spent 17 weeks on the chart and became Wright’s third biggest U.S. hit. It was his final charting single.