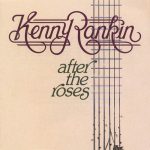 After The Roses is the seventh album by singer Kenny Rankin, released in 1980 on Atlantic.

Kenneth Joseph Rankin (February 10, 1940 – June 7, 2009) was an American singer and songwriter from the Washington Heights neighborhood of New York City. He worked in the folk rock and singer-songwriter genres, with jazz influences. His voice was distinct and would often hit high notes to express emotion in his songs.