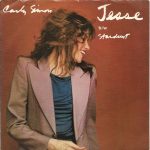 “Jesse” is a song written and performed by Carly Simon and produced by Mike Mainieri. The song was the lead single from Simon’s ninth studio album, Come Upstairs (1980).

The song is told in first-person about the narrator’s disdain for her former lover, Jesse, who has just moved back to town. She vows to have nothing to do with him, “Don’t let him near me, don’t let him touch me, don’t let him please me,” she sings. She asks her friends to remind her of how he has wronged her, because she fears she’ll end up letting her guard down and fall back under his spell. She ends up going back on her promise to herself and the two rekindle their romance. “Jesse, quick come here, I won’t tell a soul”, “Jesse, that you’ve come back to me, my friends will all say ‘She’s gone again'”, she sings. She then seeks to comfort her friends because they don’t approve. “My friends, let’s comfort them, they’re feeling bad, they think I’ve sunk so low,” she sings.

Simon’s then-husband, James Taylor, and their daughter, Sally Taylor, sing backup vocals. The single has a country-pop flair, unlike the rest of the album, which is more rock oriented.

Come Upstairs is the ninth studio album by American singer-songwriter Carly Simon, released in 1980. It was the first of her three albums for Warner Bros. Records and it has a harder, more rock-oriented sound than her previous albums. Whereas those earlier records were prime examples of the singer-songwriter genre, with soft-rocking arrangements primarily built […]