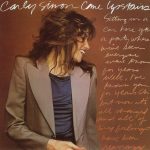 Come Upstairs is the ninth studio album by American singer-songwriter Carly Simon, released in 1980. It was the first of her three albums for Warner Bros. Records and it has a harder, more rock-oriented sound than her previous albums. Whereas those earlier records were prime examples of the singer-songwriter genre, with soft-rocking arrangements primarily built around piano and/or acoustic guitar accompaniment, Come Upstairs uses electric guitars and synthesizers prominently.

The first single released from the album was “Jesse”, an acoustic ballad that was more in the style of Simon’s earlier work rather than an example of her new sound. “Jesse” was a major hit: it remained on the Billboard Hot 100 singles chart for six months, peaking at No. 11, and was certified Gold by the RIAA for sales of more than 1,000,000 copies in the United States alone.”Jesse” also reached No. 12 in Canada, and No. 4 in Australia and became her biggest hit there since “You’re So Vain”.

7 The Three Of Us In The Dark