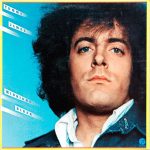 Midnight Rider is the fifth album by Tommy James, released in 1977 on Fantasy Records.