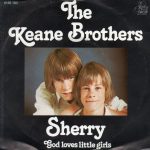 The Keane Brothers’ first single, “Sherry” (#84), was released in 1976, followed closely by a self-titled debut album in 1977. During the summer of 1977, John who was 12 years and Tom who was 13 years, reportedly became the youngest people ever to host a prime-time variety television program.

The same titled album by The Keane Brothers is their debut album, released in 1977 on 20th Century Records. The Keane Brothers was an American pop music duo from 1976-82, composed of pre-teens, Tom Keane on piano and John M Keane on drums. The duo released four albums and briefly hosted a television variety show […]