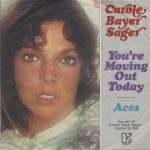 “You’re Moving Out Today” is a song written by Carole Bayer Sager, Bette Midler and Bruce Roberts. It became an international hit in 1977, in two versions.

Both Sager and Midler recorded the song. The first U.S. release was by Bette Midler, in February of 1977. It was the lead single from her LP Live at Last. Her version reached No. 42 on the Billboard Hot 100, and also charted in Canada. On the adult contemporary charts, the song reached No. 11 in the U.S. and No. 9 in Canada.