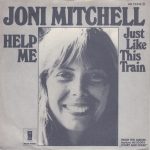 “Help Me” is a love song written, produced, and performed by Joni Mitchell, from her 1974 album Court and Spark. The song was recorded with jazz band Tom Scott’s L.A. Express as the backing band.”Help Me” was Mitchell’s biggest hit single: it peaked at #7 in June 1974 on the Billboard Hot 100, her only Top 10 hit; it hit #1 on the easy listening chart.

Court And Spark is the sixth studio album by Canadian singer-songwriter Joni Mitchell. It was an immediate commercial and critical success—and remains her most successful album. Released in January 1974, it has been described as pop, but also infuses Mitchell’s folk rock style, which she had developed through her previous five albums, with jazz inflections. […]