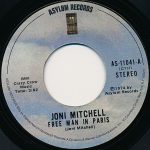 “Free Man In Paris” is a song written by Canadian singer-songwriter Joni Mitchell. It appeared on her 1974 album Court and Spark, as well as her live album Shadows and Light. It is one of her most popular songs.

The song is about music agent/promoter David Geffen, a close friend of Mitchell in the early 1970s, and describes Geffen during a trip the two made to Paris with Robbie and Dominique Robertson. While Geffen is never mentioned by name, Mitchell describes how he works hard creating hits and launching careers but can find some peace while vacationing in Paris. Mitchell sings “I was a free man in Paris. I felt unfettered and alive. Nobody calling me up for favors. No one’s future to decide.”

Court And Spark is the sixth studio album by Canadian singer-songwriter Joni Mitchell. It was an immediate commercial and critical success—and remains her most successful album. Released in January 1974, it has been described as pop, but also infuses Mitchell’s folk rock style, which she had developed through her previous five albums, with jazz inflections. […]