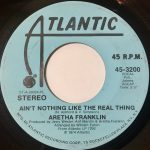 “Ain’t Nothing Like The Real Thing” is a 1968 single released by American R&B/soul duo Marvin Gaye and Tammi Terrell, on the Tamla label in 1968.

Aretha Franklin remade “Ain’t Nothing Like The Real Thing” for her 1974 album Let Me in Your Life. It was issued as the album’s third hit single that August. Franklin’s version radically re-invents the upbeat Marvin Gaye/Tammi Terrell original as a deep soul ballad which Jon Landau of Rolling Stone dismissed as “misconceived (done too slowly)”. Billboard described it as being highlighted by “extremely powerful vocals.” “Ain’t Nothing Like The Real Thing” reached #6 on the Billboard Soul chart and #47 on the Hot 100 that fall. It won Franklin the Best Female R&B Vocal Performance Grammy for 1974 marking Franklin’s eighth total and consecutive win in that category and her last such win until the Grammys for 1981.