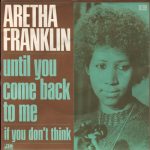 “Until You Come Back To Me (That’s What I’m Gonna Do)” is a song written by Morris Broadnax, Clarence Paul, and Stevie Wonder. The song was originally recorded by Stevie Wonder in 1967, but his version was not released as a single and did not appear on an album until 1977’s anthology Looking Back. The most well-known version of this song is the 1973 release by Aretha Franklin, who had a million-selling top 10 hit on Billboard charts. The song reached No. 1 on the R&B chart and No. 3 on the Hot 100 chart in 1974. It became an RIAA gold record.