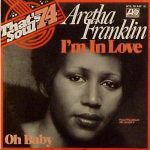 “I’m In Love” is a 1968 song written by Bobby Womack. The song was first recorded by Wilson Pickett which gave him a top-ten R&B hit on Billboard’s chart in 1968.

The version to achieve the most success came in 1974, when Aretha Franklin released it as a single. Her version hit #1 on Billboard’s R&B chart for two weeks and also peaked at number 19 on the Billboard Hot 100.