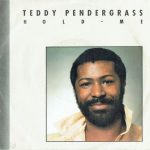 “Hold Me” is a ballad duet performed by American singers Teddy Pendergrass and Whitney Houston from the former’s eight studio album Love Language (1984). It was written by Michael Masser and Linda Creed, while the production was overseen by Masser who used one of his earlier arrangements that he had produced for “In Your Arms”, a song recorded by singer Diana Ross for her 1982 album Silk Electric, on the duet. “Hold Me” was Houston’s first ever single of her career and was later included in Houston’s 1985 self-titled debut album.

The song became a top-five hit on the Hot R&B/Hip-Hop Songs in the United States, but only peaked at number 46 on the US Billboard Hot 100. It however became a top thirty hit in Ireland, the Netherlands and the Flemish region of Belgium. Ron Wynn of Allmusic highlighted this track on Love Language and he called it a good duet. As a result of having recorded this duet in 1984, Houston was disqualified from consideration as Grammy Best New Artist of 1985.

Love Language was the eighth album by R&B/Soul crooner Teddy Pendergrass. It was his first record for Asylum Records after being a longtime artist on Philadelphia International Records. It did much better on the Billboard 200 than his last two records, peaking at #38. He had not reached the top 40 on the album charts […]