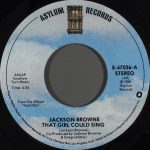 “That Girl Could Sing” is a hit single written and performed by Jackson Browne from his 1980 album Hold Out. The song peaked at #22 on the Billboard Hot 100, charting for 13 weeks after its Sept. 20, 1980 debut. It was also released as a single in Japan. “That Girl Could Sing” was the seventh-biggest hit single of Browne’s Top 40 career (beating 1976’s “Here Come Those Tears Again” by one position higher on the Billboard Hot 100)

Hold Out is the sixth album by American singer-songwriter Jackson Browne, released in 1980. Although critically the album has not been as well received as other Browne recordings, it remains his only album to date to reach number 1 on the Billboard chart. The song “Of Missing Persons” was written for Inara George, the daughter […]