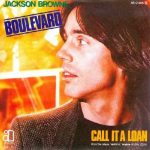 “Boulevard” is a song written and performed by American singer-songwriter Jackson Browne. It is from his 1980 album Hold Out. When it was released as a single, it entered the Billboard Hot 100 chart at position number 72 on July 5, 1980. It peaked at number 19 and spent 16 weeks on the chart, the fifth-biggest hit of Browne’s Top 40 career. Besides the United States, the song was also released as a single in Spain, Japan, the U.K., Italy and Germany. In Canada, “Boulevard” reached number four.

Hold Out is the sixth album by American singer-songwriter Jackson Browne, released in 1980. Although critically the album has not been as well received as other Browne recordings, it remains his only album to date to reach number 1 on the Billboard chart. The song “Of Missing Persons” was written for Inara George, the daughter […]