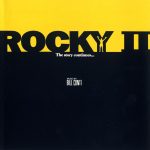 Rocky IIis a 1979 American sports drama film written, directed by, and starring Sylvester Stallone. It is the sequel to the 1976 film Rocky, and was the last installment in the film series that was distributed solely by United Artists.

Just as in the previous installment, Bill Conti composed the film’s music. A soundtrack album containing Conti’s score was released on August 25, 1979, and charted on the Billboard 200 for five consecutive weeks.

8 All Of My Life (Instrumental)

Related Terms:
1984 The Kazu Matsui Project – Is That the Way to Your Heart 1981 The Buddy Miles Regiment – Sneak Attack