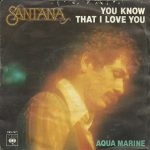 “You Know That I Love You” is a song by Latin rock group Santana, from their 1979 album, Marathon. It is the fourth track on the album and was released as its only single. The lyrics were written by Chris Solberg, Alex Ligertwood, Alan Pasqua and Carlos Santana.

The song reached #35 on the Billboard Hot 100, making it Santana’s 8th most successful single.

Marathon is the eleventh studio album by Santana. This marked the beginning of the group’s commercial slide, in spite of having the Top 40 hit “You Know That I Love You”. Alex Ligertwood, who would sing with the group throughout the 1980s, joined the group for this album. Tracks 1  Marathon (Carlos Santana) 01:27 2  […]